Yeah, The Exorcist is misogynistic. But is that all it is? 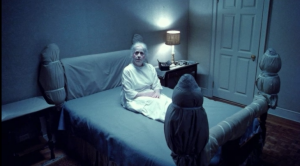 William Friedken’s 1973 horror classic The Exorcist, like the novel by William Peter Blatty, is more than just a story about demonic possession. It’s a manifestation of the most deep-seated anxieties in American culture at that time, many of which still exist today. Arguing that “most good horror films are good because they exploit ambiguous feelings andhalf-baked beliefs lurking in the public,” Amanda Marcotte sees The Exorcist as representing “an era when cultural ambiguity was at its frightening heights.” Horror movies of the 70s and 80s, she argues, manifest a male phobia of the female sexuality, which results in the need to possess, abuse, slash, and destroy female bodies. In her retrospective account of the film at Ms. Magazine‘s blog, Adriane Allan argues the same thing: the film harbors an “implicit fear of women and their sexuality,” the result of a “subliminal backlash from some of the profound cultural changes occurring throughout the decade of the ’70s” such as the Women’s Liberation Movement and more open attitudes toward sexuality.

These feminist interpretations make sense. Like other movies of that era (I’m thinking especially of Looking for Mr. Goodbar), The Exorcist can indeed by read as a misogynistic reaction to women’s independence. The movie depicts a fatherless family whose female head is a successful motion picture actress. She is so occupied by her work that she neglects to notice how her daughter, Regan, takes up playing with ouija boards and conjuring an imaginary (male) friend named “Captain Howdy.” Captain Howdy is actually a ferocious demon who preys on the young girl, eventually taking over her body and violating her sexually, spewing forth bodily fluids and wreaking havoc on the small unconventional family in the process. Overwhelmed and helpless, the girl’s mother turns to male psychiatrists, male neurologists, and finally to the “fathers” themselves, Catholic priests, who end up restoring order to this highly dysfunctional situation. In other words, patriarchy saves the day for this helpless female household.

But is patriarchal terror of female independence the only phobia at work here? I say no. The movie also draws on cultural anxieties associated with becoming old in a culture that privileges, idolizes, and idealizes youth. The Exorcist is driven not only by misogyny and gynophobia, but a vehement ageism. We don’t see this, though, because we lack the ageist framework that brings it to light. In this blog, I will show how The Exorcist exploits our youth-bedazzled culture’s anxieties about old age — not “getting older” but getting old — and the loss of mental, emotional, and physical independence that accompanies that process.

nor Marcotte identify ageism as a psychological force in the movie, both touch on it implicitly in their critiques. Allan writes that this is “a terrifying story of a young girl who becomes unbearably ugly.” But this transformation is read as a contusion on the chin of male power. At 12 years old, Regan is on the brink of puberty and “perhaps more threateningly from a male perspective, sexual awakening.” Allan explains how this misogynstic phobia manifests itself:

Heightening this horror of female adolescence, the “little girl” masturbates with a crucifix. And then there’s her appearance: face cracked and cankered, a grotesquely vivid exaggeration of that alarming condition that makes teens seek out any acne-fighting potion they think might work.

Marcotte as well touches on a strain of ageism in the film when she identifies it as “an unsubtle reactionary screed that lambastes the female half of the species for maturing from adorable little girls to grotesque women.” Even though she doesn’t go into the “maturing” process, she does note that the girl is taken possession of, she is no longer a “girl.” Her possession by the demon ages her way beyond her years. She becomes bedridden, incontinent, emaciated, and dependent on caregivers. Her “cracked and cankered” face, which Allan associates with teen acne, suggests as well wrinkles and bed sores. She is restrained and at times sedated. She becomes, in other words, what we all fear we can someday be once our bodies become possessed of old age and are carted off to a nursing home.

Cultural anxieties about oldness operate not only as a narrative impulse in the movie. It’s the theme of an important subplot. One of the priests who performs the exorcism, Damien Karras, is filled with guilt for leaving his elderly mother to grow old alone in her inner-city apartment. In one powerful scene, Father Karras is taken to a mental ward where

his mother, having been found incapacitated, has been placed. The ward is filled with elderly psychotics who surround the priest when he enters. Breaking away from them, he approaches the bed at the far end of the room where his mother lies. “Why you do this to me, Dimmy?” she asks. When he tries to comfort her, she jerks away, revealing the restraints that keep her fastened to the bed. The images in this scene clearly parallel the priest’s later encounter with the possessed teenager, who is also tethered to her bed and who mimics the mother’s voice: “Why you do this to me, Dimmy? Please, Dimmy. I’m afraid.”

The demon’s mimicking of his mother’s voice breaks the priest’s frail composure. “You’re not my mother!” he screams. But in a sense, she is: the girl has become incapacitated, helpless, and dependent on others. The movie actually associates the demon with the priest’s mother in a troubling dream sequence where the guilt-ridden priest sees his mother ascend from a subway, call to him, then descend once more into the depths of the city.

The priest’s failure to adequately support his mother as age takes its toll on her mental and physical health reflects our own feelings of powerlessness in the face of growing old. We all fear the “possession” of our own bodies by the inevitable process that, in many cases, robs us of our independence in a culture where the nuclear family structure is not amenable to caring of their elderly members. How to deal with the phobia, the guilt, the anxiety of growing old? Exorcise the elderly from our collective consciousness. Remove them from iconographies of beauty, vigor, and independence. Is not every face-lift an exorcism of the old person we are becoming?

Though her “innocence” may have been lost forever, in The Exorcist the girl’s youth is restored. This is what’s good about the movie. Still, we walk away feeling like it still has a possession of us at some level we’re not quite comfortable with. And as we age, we feel the demon rear its ugly head at a world where even the Fathers can’t save us.